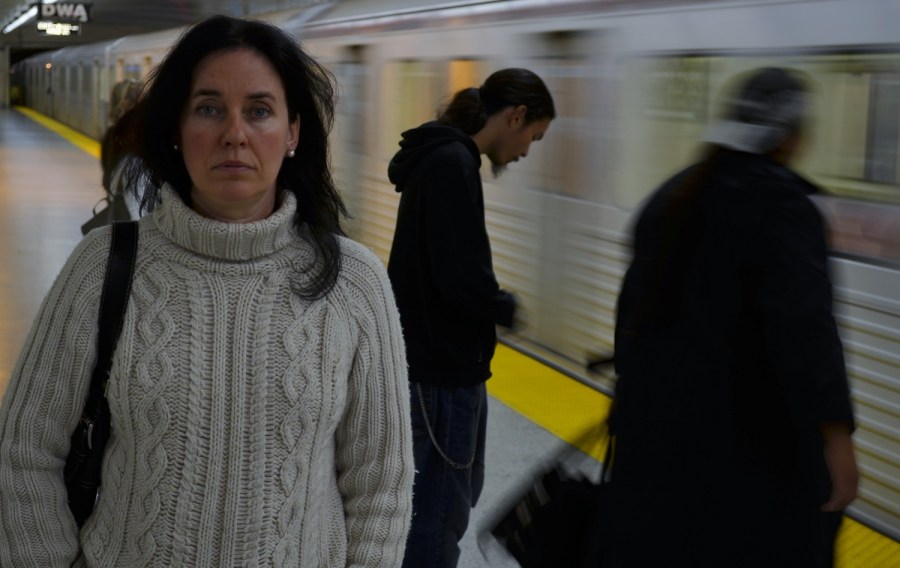 High Park resident Julie Thomson, who lives near the Keele St. subway station, says she "may as well sleep on the platform" because it's just as loud there as it is in her home. Alex Consiglio/Toronto Star

For Julie Thomson, not being able to have her father-in-law over for Christmas was the last straw.

Thomson, 46, lives near Keele Station and says the throbbing noise of passing subway trains has kept her father-in-law, who has Alzheimer’s and is noise sensitive, away from her home.

“In the last two years it has increased unbelievably, ” said Thomson, who bought a house just north of High Park seven years ago. “I used to hear the odd one – now I hear every single one.”

Her complaints have been corroborated by a TTC-commissioned report that pinned the problem on deteriorating infrastructure.

When a train passes underneath Thomson’s home, her dishes rattle, pictures shake on the walls and vibrations run through the floors like you’re at a rock concert.

If it’s rush hour, conversations must be halted until the racket ends.

“It’s completely intrusive in our lives, ” Thomson said. “I wouldn’t have bought this house if I knew it was like this.”

Her neighbours, Stasia Kopec, 66, and Wanda Pawlowski, 64, have lived in their homes for more than 30 years and said it’s never been like this.

“It’s really, really bad, and it doesn’t have to be because it wasn’t before, ” said Pawlowski, who has troubling sleeping at night.

Thomson says she began complaining to the TTC, along with her neighbours, in 2010 and it’s been extremely frustrating trying to get officials to listen and take action.

“The TTC was in complete denial; they don’t have a lot of sympathy for us, ” said Thomson, remembering how she was at first told, “You live near a subway, what do you expect?”

But nearly two years later, the TTC commissioned Aerocoustics Engineering Ltd. to report on the issue after complaints from many others along the Bloor subway line.

Two reports, one for the Jane Station area and the other for Keele Station, were released in July and found “vibration levels have significantly increased” since last studied in 1993, 2000 and 2005.

Councillor Sarah Doucette (Ward 13, Parkdale-High Park), area residents and TTC representatives were set to discuss the findings and the TTC’s plans going forward Thursday, but the meeting was cancelled.

The Jane Station report found vibration levels in the area have increased by more than three or four times since last reported in 2000, “due to the maintenance wear issues.”

Those issues include corroded rail pads, worn-down rails that have become corrugated, and wheel defects, the report notes.

It concludes that “rail condition is the more dominant factor in the high levels of vibration being experienced.”

The Keele Station report found vibrations in the area are two or three times higher since last reported in 2005. “We would expect a decrease in levels of ground borne vibration if … corrugation was mitigated, however this may be offset by the large number of trains identified with wheel defects, ” the Keele report concludes.

As to what plan the TTC would have presented Thursday, Nicholson said the TTC is still “in the process of trying to figure out what were going to do.

“We’re still formulating – we haven’t formulated any time frame yet, ” said Nicholson, adding “I don’t know the reason why … or what caused the delay.”

Nicholson noted the TTC is “such a large transit system, other areas need repairs, too.”

Doucette says that, despite listening to many complaints, the tremors still shocked her when she visited her constituents’ homes.

“I sat in some of their houses and things on the wall would rattle, china would rattle and it would get so loud you had to stop your conversation, ” she said.

“How can someone live in these houses? We need to get this fixed so people can live in their homes comfortably, ” Doucette said. “And we need to get it fixed as soon as possible.”

Nicholson said the TTC will have a plan ready for the rescheduled Oct. 18 meeting.

Originally published in The Toronto Star.

A saner life for ‘Zanta’