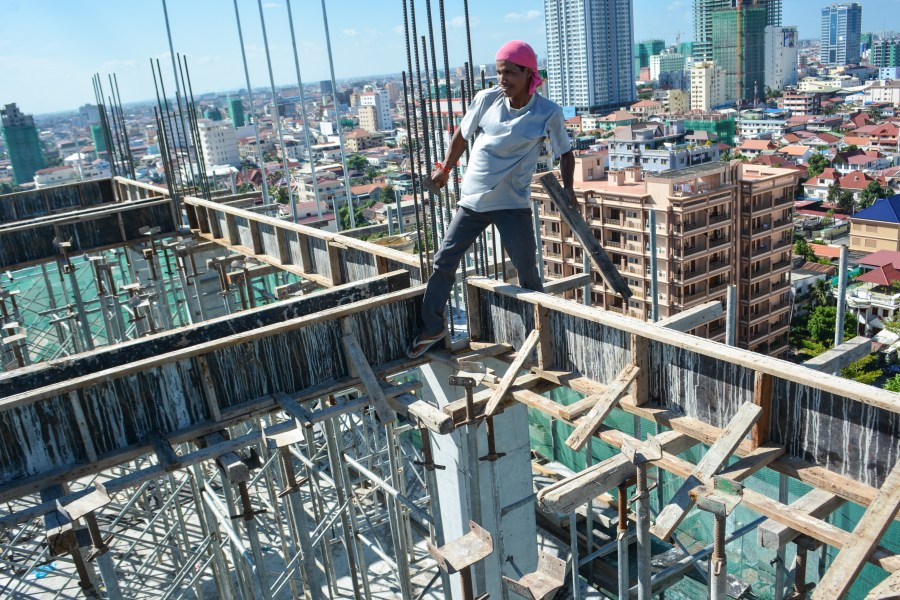 By Alex Consiglio and Hay Pisey

Every morning, An Vy slips on a pair of flip-flops and heads to work, climbing 15 flights of stairs littered with debris to the roof of a high-rise condo under construction in Phnom Penh.

There, the scrawny 26-year-old works his way up a maze of scaffolding and teeters on its edge without a safety harness or helmet and begins his work.

“I am so scared that I’ll fall down from the top to the ground, but I have to do it,” Mr. Vy said last week as he hammered pieces of wood into place for a concrete mold.

“I do not have any other skills apart from this. I stopped studying at grade three because my family is very poor,” Mr. Vy explained, adding he cannot afford to buy his own safety equipment on his pay of about $8 per day.

“I need a harness belt, boots, and helmet to protect my life.”

Around him, Phnom Penh is undergoing a massive building boom. Across the country, investment in construction has risen from $840 million in 2010 to $2.7 billion in 2013, according to the Ministry of Land Management, Urban Planning and Construction.

But the government has not been able to keep pace with the boom to ensure the safety of the sector’s workforce, which labor experts estimate at 175,000 to 200,000, many of whom are unskilled and paid by the day.

The Ministry of Labor, which is responsible for worker safety, does not have a safety code for construction workers or the buildings they work on. Instead, construction firms have been left to police themselves, and face no consequences for endangering workers’ lives, which are lost at an alarming rate.

In its 2011 to 2015 Decent Work Country Program for Cambodia, the International Labor Organization estimated that at least 1,500 workers died in 2009 of occupational accidents—roughly four people every day—with construction sites and brick kilns being the most dangerous work places in the country.

Last week, the Labor Ministry invited the Korea Occupational Safety and Health Agency to its headquarters to host a workshop and help the ministry draft regulations to hold construction companies accountable.

“The unsafe working conditions cause the accidents,” Leng Tong, director of the Labor Ministry’s safety department, said outside the workshop. “In Korea, the managers and companies are punished, but here that does not happen.”

Although companies are required to get a construction permit from the Land Management Ministry, which includes a promise to ensure worker safety and provide safety equipment, enforcement is nonexistent.

The 1997 Labor Law ostensibly guarantees safe work places for employees, including the provision of safety equipment, but says the Labor Ministry must establish a prakas, or ministerial proclamation, to enforce the law.

“We do not have the regulations to require the workers to wear safety equipment,” Mr. Tong said. “So far, we do not conduct inspections on high-rise construction sites.”

But it’s high-rise buildings—filled with condominiums and office space—that are springing up in Phnom Penh at a staggering rate.

In 2009, less than 100 condominium units were available in Phnom Penh, a number expected to grow to more than 6,000 by 2018, according to a July 2014 research report by realty group CBRE-Cambodia.

Mr. Tong said his inspectors have tried to enter condo construction sites in the past, but have always been turned away due to a lack of power.

“When we have gone, workers just say they are a subcontractor and cannot allow us on the site,” he said. “It’s hard to find out who’s in charge and responsible for the workers’ safety.”

Mr. Tong said he could not provide reliable statistics for the number of construction workers injured or killed per year because companies do not report accidents.

“On construction sites, accidents are high,” Mr. Tong said. “It’s very hard [to track accidents] because we get information mostly from the newspapers.”

It is only after lethal accidents occur, and are reported, that the government will potentially suspend construction and close a site temporarily, as was the case early this month when a support beam plummeted 12 stories and killed a woman driving by an Overseas Cambodia Investment Corporation (OCIC) construction site next to Olympic Stadium.

After closure, an inspection is then carried out by the Land Management Ministry, not the Labor Ministry, to issue guidelines on making the site safer. The site is then allowed to reopen if those conditions are met.

Temporary closure is ostensibly the only punishment construction companies currently face from either ministry, according Mr. Tong and Huy Nara, director of the Land Management Ministry’s construction department.

“We will close the site, but step by step we do this,” Mr. Nara said in his office last week. “But you are right, we are lacking the penalties.”

Yi Kannitha, the deputy director of the Labor Ministry’s safety department, said the ministry has plans to introduce a prakas for construction worker safety some time next year, which will lead to inspections of large-scale sites.

But Dave Welsh, country director for the Solidarity Center, a U.S.-based labor rights group, isn’t holding his breath for the ministry to take action.

“The Ministry of Labor is one of the least proactive ministries,” he said. “They have to be pushed on everything, especially in terms of enforcing worker protection.”

Mr. Welsh, who considers construction work “the most dangerous industry in the country,” said a prakas to enforce worker safety measures is being stalled because the government fears it would scare away investors.

“It’s money,” he said. “With every prakas that puts up labor costs, the rule of thumb from the government’s point of view is that it detracts from investment opportunities.”

Mr. Welsh added that the majority of construction workers risking their lives on the job are not insured in the case of injury or death due to a loophole in the National Social Security Fund (NSSF), which is supposed to compensate injured workers and families of workers killed on the job.

“The industry’s—and to an extent the government’s—take on it is that these are independent contractors or day laborers; they’re not actual employees,” he said. “That’s nonsense. Any payment is, in effect, a contract.”

At the construction site in Phnom Penh where Mr. Vy works, neither he nor the dozens of other workers there could name the company they were working for. All they knew was that a man named Thorn would be there at the end of the workday to pay them in cash.

Cheav Bunrith, director of policy for the NSSF, said companies are required by law to register with and contribute to the scheme, but only salaried employees are insured.

“The workers who are paid day by day are not registered,” he said, explaining that it’s up to individual workers to pay into the NSSF if they want insurance.

But workers like Dam Nang, 31, a general laborer who works with Mr. Vy, cannot afford coverage on his $5.20 daily income.

Mr. Nang, who is paid by the day, said he “dare not ask” for a contract or safety equipment for fear of losing his job.

“I am so scared to fall off the building,” said Mr. Nang, sitting in his makeshift bed on the first floor of the condominium building.

“When I look to the ground, the hair stands up on the back of my neck.”