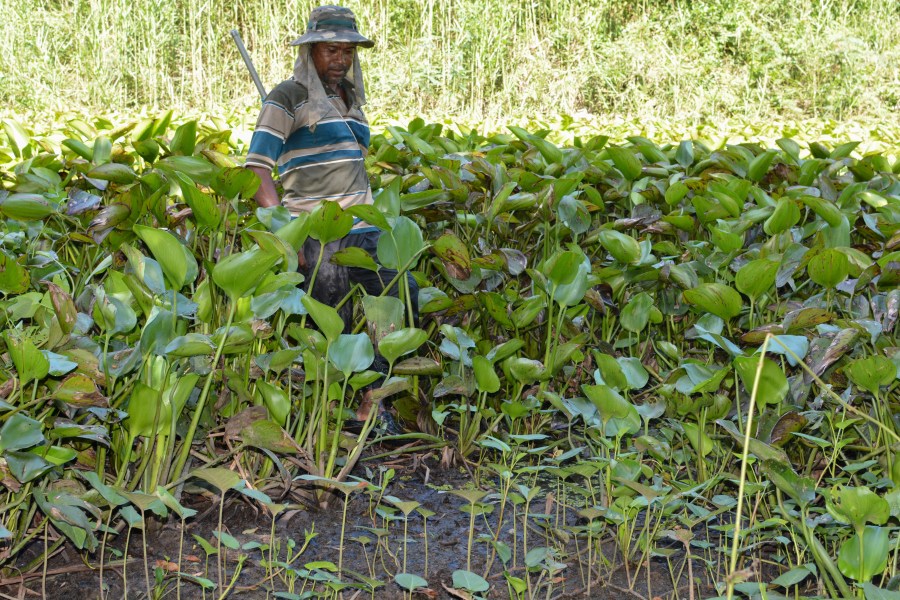 By Alex Consiglio and Phorn Bopha

SREI SANTHOR DISTRICT, Kompong Cham province – Suon Sokha was not going to head out to the marshes without preparing.

“Bring the guns,” he said, strapping an AK-47 assault rifle over his shoulder and making sure his deputy officer, Him Rin, was also armed. A third officer carried a stick.

Mr. Sokha, the acting police chief of Svay Por commune, had good reason to be cautious. On June 21, his boss made the same trip to investigate illegal fishing in a nearby wetland and never came back.

After a weeklong search by hundreds of villagers in the area turned up nothing, people here have mostly given up believing that the commune police chief, Chan Sophal, 48, will ever be found. His wife, Mout Sinuon, held a funeral for her husband last week.

Mr. Sokha is now acting in Chan Sophal’s position, and on Saturday morning, the commune’s three-strong police force was ready to retrace his fateful trip to the area locals call “the lake,” a sprawling floodplain along the Mekong River.

After a 20-minute ride along potholed dirt roads, the officers pulled onto a secluded duck farm, where they said Chan Sophal would often leave his motorcycle and uniform before trekking to the lake on foot in order to not give away his approach.

At the duck farm, two villagers, machetes resting on their backs, joined the police as they headed into the wetlands.

Empty water bottles lined the paths leading to the water, discarded by the search teams that came up empty last month.

The police had not been back here to crack down on illegal fishing since their old boss’ funeral. Coming alone is now forbidden, Mr. Sokha said. Wearing a uniform and carrying arms are required.

As Mr. Sokha neared the lake, his two officers rested in the shade of trees as he and the two villagers pushed on into the thick, knee-high marsh.

One villager waded deep into the mud, stepping deliberately, hoping to land his foot on the body of Chan Sophal.

“If he got a snake bite, I would have found his body,” Mr. Sokha said. “But we found no body. He was killed and buried in the mud.” 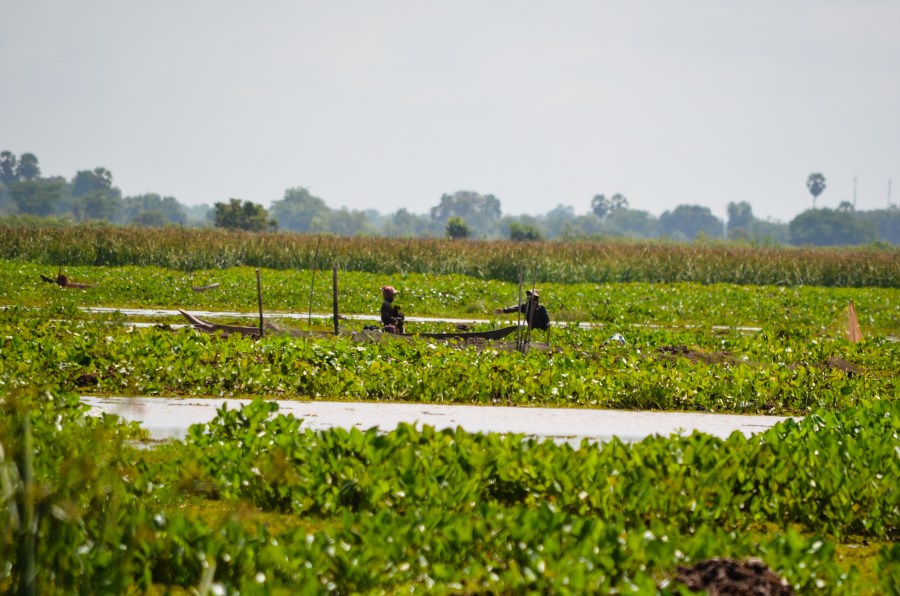 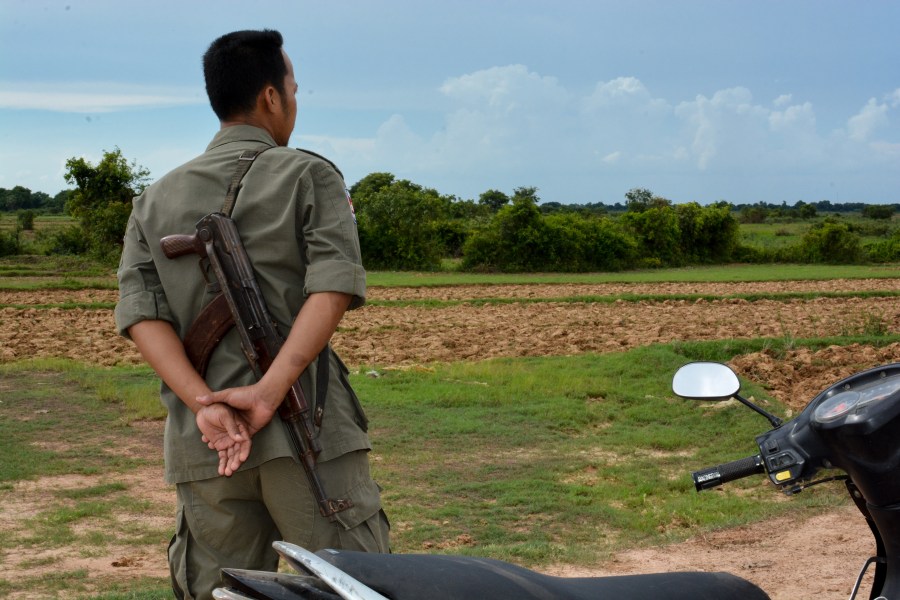 A commune police officer peers over the expanse of land that missing police chief Chan Sophal would sometimes hike across to reach wetlands being used by illegal fishers. (Alex Consiglio/The Cambodia Daily) 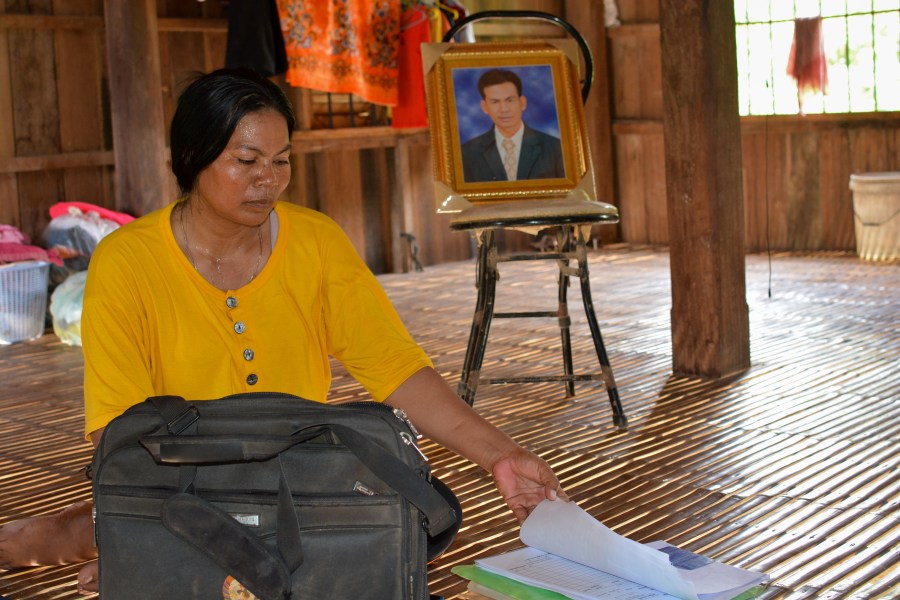 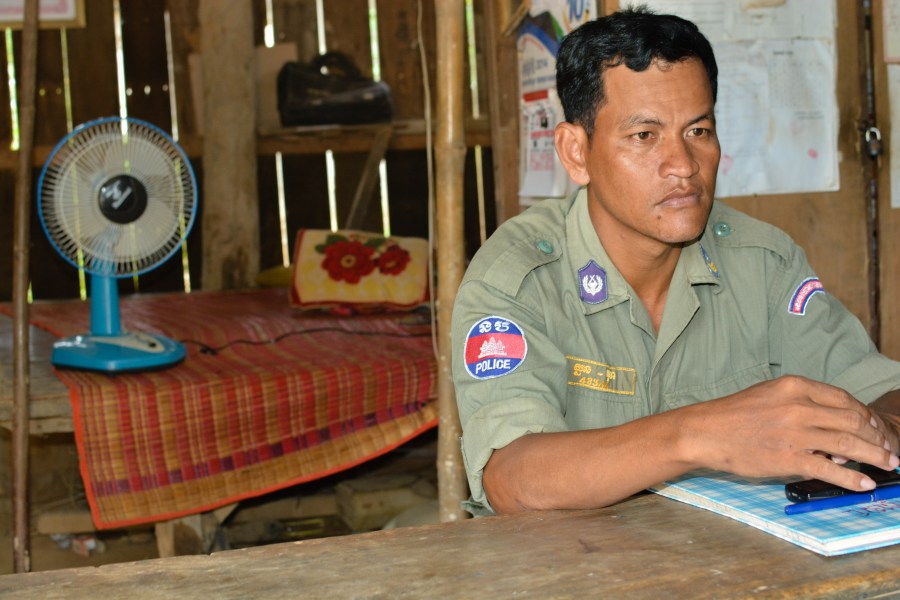 Creeping closer to the edge of the water, Mr. Sokha tried to peer over the thick growth of water hyacinth—the commune police don’t have a boat.

“If any illegal fishers were here, they probably spotted us and ran away,” he said.

“Those two are fishing legally,” he added, pointing to a pair of fishermen deep within the wetlands who were tossing fish into a small boat. They were using small, legal nets, and there was no sign of battery-charged gear, he explained.

Mr. Sokha said his former chief had started visiting the area with greater frequency because villagers were complaining that illegal fishermen were depleting the fish stocks they depend on for their livelihood.

“He didn’t go that often last year,” he said. “But now the fishermen are more wild, so he went more.”

The mostly poor villagers in the commune complained that fishermen were floating in from Kandal province and stealing their fish with illicit, electric-charged gear.

The government bans commercial fishing from June to September, during breeding season, to allow fish stocks to replenish. Families are allowed to catch fish to eat, using simple rods or small nets.

Knowing the inherent dangers of trying to stop illegal fishermen, who were sometimes armed, Chan Sophal’s family urged him to stop going to the lake alone, which he had started doing two or three times a week.

“That lake is so quiet it gives me goosebumps,” Mr. Toem said. “He went there only with a machete. I don’t know why he didn’t bring a gun.”

Mr. Toem thinks that Chan Sophal may have been taking bribes from the illegal fishermen, a theory Mr. Sokha vehemently denies.

The way he tells it, Chan Sophal was simply doing his job in protecting the interests of the community by trying to scare off the illegal fishermen invading their lake.

“He was doing his job to serve the state and his people,” said Mr. Sokha. “He would never, ever take a bribe.”

A father of five and police officer since the early 1990s, Chan Sophal was known in the area as a dedicated cop consumed by his work.

He slept in the commune police office nearly every night and rarely saw his wife, who lived in Khnar Sar commune, or his mistress, who lived in Prek Por commune.

“Fishermen would threaten that they’d burn his motorcycle if he did not leave them alone,” said Va Kimsean, Chan Sophal’s mistress, sitting outside her home.

“He would come back with fish for us,” said Ms. Kimsean. “He would confiscate the fish and share them with the villagers, his staff or sell them to buy rice. But he never took bribes to give me money.”

Ms. Kimsean said Chan Sophal was a selfless man who was content with his salary of $150 a month.

But commune police officer Mr. Rin, during the visit to the wetland where Chan Sophal disappeared, said the best way to take bribes was to visit the illegal fishermen alone and out of uniform.

“I suspected [Chan Sophal] may be taking bribes, but I can’t really talk since it’s police work,” he said.

When the group returned from the floodplain, Chem Komaboth, one of Chan Sophal’s sons, was hanging around the commune police office.

Mr. Komaboth, 23, said his father was trying to lead him away from following in his footsteps before he disappeared.

“He was trying to find me a job in a bank,” he said. But now his goal, he said, is to become a police officer in his father’s honor.

“My father died a hero. He was serving his country and risking his life for the people.”